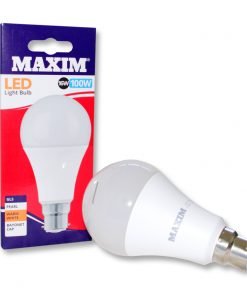 Using LED bulbs over CFL and incandescent bulbs has major advantages. Save 90% on your lighting bill. Never worry again about the kids leaving the lights switched on. LED bulbs turn on to full brightness instantly. No more waiting for light bulbs to warm up.

LED light bulbs also use a lot less energy in comparison to their counterparts, switching over to LED light bulbs will save you money in the long run as they also last longer!

Maxim Lamps is one of the oldest companies in the lighting industry with the first Maxim lamp produced in 1879.

The brand Maxim has a long and distinguished history dating back to the 19th century when it was established by Hiram Maxim, an American engineer and inventor. He developed an incandescent lamp at the same time as Edison, Swan, Sanger, Man and Lane Fox with lamps which had carbonised paper for filaments.

Hiram Maxim transferred his activities to England during the 1880s and produced light bulbs in London.